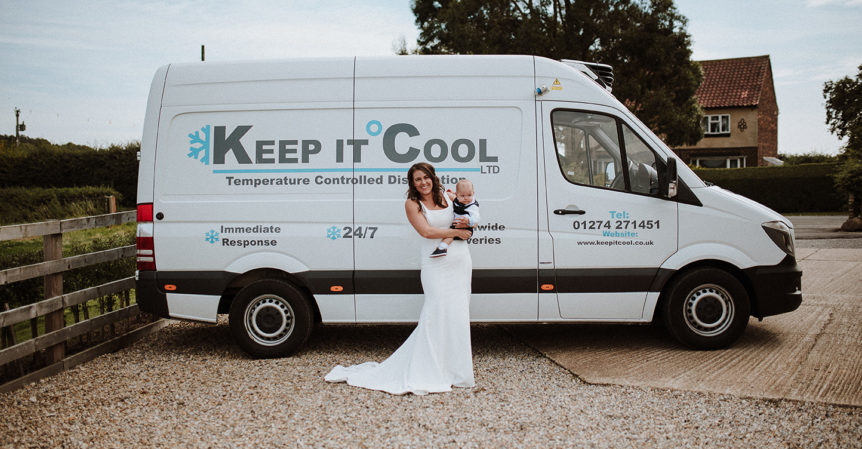 We introduce Nikki, who heads up the Keep it Cool team.

Despite starting out in recruitment, Nikki was always destined to work in transport. Her father was the founder of Redhead International, although he has not worked in the industry since selling his eponymous company whilst Nikki was still at school. Indeed, Dad’s advice to the teenage Nikki was: “Do NOT go into transport.”

She took note, with an early and successful start in IT recruitment. When the turmoil of the recession hit, Nikki took stock and considered her options. She decided a career in recruitment was not for her, and in 2009 applied and was accepted onto the Graduate Management Programme for Gist.

Gist is a global leader in transport and logistics and their graduate management scheme was the ideal springboard for an ambitious young woman like Nikki. Moving to Barnsley and then Hemel Hempstead, she held the high pressure roles of Transport Night Shift Manager and later Operations Manager, responsible for overnight deliveries to over one hundred Marks and Spencer food stores. Moving back North, Nikki took on the Vow contract, managing 4 depots and ensuring the timely delivery of stationery to outlets across the North of England and Scotland.

With her background in transport, Nikki had always been aware of local company Keep it Cool 24-7. When she heard that owner Richard may be considering selling, she seized the opportunity, and by the summer of 2014 was in charge of her very own logistics firm.

At that time, Keep it Cool 24-7 was a different beast to the business Nikki knew she wanted to build. Rebranding as ‘Keep it Cool’, she worked hard to grow and transform the company from a ‘man and van’ setup to the professional, round-the-clock operation it now is.

She expanded and moved the temperature-controlled fleet to a single location (fleet now housed with Expect Distribution on Euroway Industrial Estate, Bradford, West Yorkshire), liveried all vehicles and made all drivers employees. She recruited a strong team to support her efforts, with Alan Milnes joining in 2017 as Transport Manager and in 2018, Vicki Ineson as Transport Supervisor.

She went to talk to each and every customer, asking what they wanted and developing services and working practices to suit their needs. Her efforts paid off, with year on year growth of 20% and new clients won almost exclusively by recommendation.

Keep it Cool now specializes in same day temperature-controlled deliveries of food. From raw vegetables to seafood, ice pops to artisan ice cream, the Keep it Cool team is available, round the clock, with a fleet of vehicles and a driver on the road within one hour. Specialising in sameday food transportation means dealing with deliveries of heated, refrigerated, chilled and frozen products, on an extremely tight delivery schedule.

The company delivers to RDCs for all the major supermarkets and can handle anything from a single box to 16 pallets. Nikki said: “I want Keep it Cool to be the first choice when the unexpected happens.”

She goes on to explain that if a food business suffers a production delay due to missing ingredients, vehicle failure, a supply chain hiccup or a flurry of additional orders, she wants Keep it Cool to be their first point of contact.

Asked about her experiences as a woman in the traditionally male-dominated transport industry, Nikki is sanguine. In her early career with Gist, she saw female rising stars (including herself) be promoted and do well. There were enough women at the top of that company to show it could be done, so she was not short of role models. As logistics is a 24 hour industry, she recognizes that family life can be difficult, and the burden of childcare tends to fall on women more than men.

Nikki understands these pressures better than most, as she has two children under the age of two. Recruiting a strong and supportive team was invaluable, as this enabled her to take a little time off work when her babies were born (albeit only a few months).

She is firm on the importance of all team members being able to take time off from the business. Looking back on the early days of Keep it Cool, she remembers frequently going to work with no sleep after a night on the phone, as well as taking calls whilst hiking in the Alps, training for a half marathon and riding a horse. These days, with a strong team around her, she is a firm believer in a sensible work/life balance.

She describes the team atmosphere as easy-going and supportive. She said: “It can be such a high pressure environment, you have to ensure there is an overriding light hearted approach in the office and that we can all laugh off the manic moments! Everyone steps up when times get busy to ensure that all gets done but that we all ultimately stay sane!”

Nikki loves her work. She says it’s stressful and demanding, but also very exciting. She loves the thrill of juggling jobs and making sure the end result is always complete satisfaction for every client. When she’s not at work, Nikki enjoys relaxing with her husband and children at home in Micklethwaite, and (very!) occasionally gets out for a run.

If you’d like to chat with Nikki and the team about same day temperature-controlled distribution, whether chilled, frozen, refrigerated or heated, email now.